“So”, I hear you thinking, “I remember James being very anti-software bundle earlier this year. He had that spat with John Casasanta and everything. Imagine my surprise when I saw this offer in my inbox this morning – both DragThing and PCalc are part of the new MacUpdate Promo Winter Bundle. Is he a just a big capitalist sellout after all?” 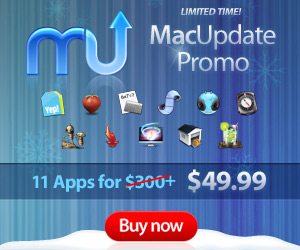 Ok, let me qualify that slightly.

Way back in June, we took part in the inaugural TheMacBundles.com bundle. The idea was a great one – this was a bundle by developers, for developers, with an equal split of the profits for all who took part. In practice however, it was something of a disappointment. Sales of the bundle were small, not down to the quality of the applications or people involved, but partially because it was going up against the much stronger MacUpdate bundle at the time, and partially because – in my opinion – it didn’t compare particularly favourably to the slick marketing efforts of MacHeist and MacUpdate.

It was mocked at the time by the ever-tactful John Casasanta of MacHeist, who basically said that without a substantial marketing budget, it was doomed. Annoyingly, he was actually right.

A couple of months ago, the MacUpdate people contacted me and asked if I wanted to be part of their winter bundle. What they offered per-bundle-sold wasn’t completely terrible – I’ve been offered a lot worse. Sales of DragThing have slowed a little bit of late since I’ve only done fairly minor updates recently, and I figured it couldn’t hurt to get it back into the public eye. And likewise, PCalc on the Mac has always been a good promotional tool for selling copies of PCalc on the iPhone.

So, fine, let’s give it a try. It’s a good bundle of apps – I fancy getting a few of them myself. I’ve been looking forward to the point-and-click adventure game Machinarium for ages, and I didn’t realise it was already out. Plus I’ve heard good things about Socialite and GarageSale, and many of the others. Path Finder is another veteran app in the bundle, and I know lots of people use that in combination with DragThing.

Will we make more money over the next two weeks than we would have otherwise? Am I damaging future sales of our apps? That remains to be seen. You can see the total number of sales of the bundle on the MUPromo page. I’m legally not allowed to tell you exactly how much of the $49.99 we’re getting, but think of a very small number. Now half it. You’re pretty much there. Feel free to multiply that by the current sales figure.

The bottom line is that our decades-old kitchen is due to be replaced in January, and it would be nice if this deal helped pay for it… Does that make me a capitalist?