I’m impressed, PCalc 1.4 and PCalc Lite 1.4 were approved and available in about two and a half days from submission to the App Store. That’s the fastest I’ve seen so far – I submitted them late on Tuesday afternoon and they were both up there as of 3am Friday. Within two minutes of each other too, which is new.

I’ve updated the metadata on the apps so they should change release date to today when the store next pushes an update out to its servers – it usually takes an hour or two. I also changed the copyright strings to say  2009 – don’t forget that folks.

I wonder if updates to apps get the same level of scrutiny as new ones? I’d like to believe that someone out there somewhere in Cupertino has been assigned to my account and always reviews the same apps when they update. I suspect though, that they are just randomly assigned to whoever is free in the queue. Things are definitely getting faster though, but I don’t know if that’s just down to throwing more people at the problem, or improved procedures. Anyway, thank you mystery app store reviewer(s).

Both apps now sport a splashscreen, something that was previously frowned upon by The Powers That Be. 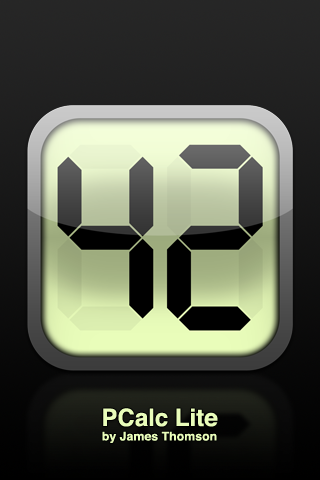 I thought I’d put a toe in the unknown waters of Apple guidelines and see if it was accepted, and it was. I’ve seen lots of apps that use one nowadays and it makes a lot of sense for PCalc anyway. The calculator themes and layouts meant you usually ended up with a jarring change of appearance after the app launched.

The initial display for an iPhone app is just a fixed picture while the actual code is loaded in the background. It’s meant to give the impression that the app has launched faster than it has, but more often than not it has the opposite effect and also makes the user think they can click on things before they really can.

I was also vaguely concerned by a new UI feature I added for 1.4.

PCalc now keeps track of the conversions (and constants) you use, and displays the most recently used at the top of each section. The idea is that you save a lot of taps if you use the same conversions frequently. I already had the code for tracking recent selections from desktop PCalc but it wasn’t wired up to any UI in the phone version.

Anyway, one of the features in the Mac version is a button that swaps the most recently used conversion round, so if you just did “Feet to Inches”, it would switch to be “Inches to Feet”. I wanted that in the phone version too, but it was tricky to find a good place to put it. Initially I just added a “Swap” button at the top left of the top level of the Conversions section. That worked, but I extended the feature to also show recent activity one level down in the individual categories. The top left position shows the back button in that case, so there was no room for the swap button.

The best place I could find was the right side of the cell that displays the conversion, so I needed a button.

I thought that the button you get for showing more information about an item was a good model – like you see in the network section of Settings.app. If you tap the button, something different happens than if you tap on the rest of the cell. There wasn’t anything appropriate provided by the system though, so I made a custom button, and painstakingly recreated something in Photoshop that was “in the style of” the system buttons but with a different symbol on it.

I really like trying to recreate iPhone and Mac UI elements in Photoshop. Most of them probably were made in Photoshop originally, so it’s fun to figure out how they implemented certain effects.

So, that’s my swap button – tap it, and it reverses the displayed conversion. You can then tap the cell to perform it.

I’d heard rumblings that Apple was cracking down on “non-standard” iPhone UI and not approving some apps because of it, so was worried this would qualify. But it was passed by the censors – either because they thought it was suitably Apple-like, or maybe they just didn’t notice. I hope the former!

Anyway, while I’ve been typing, the PCalc release dates have updated, even if the apps haven’t hit the front page yet. There seems to be a lot of caching in the App Store servers, so it can take a while for changes to be reflected everywhere – the iPhone store often shows different things to the iTunes one.

Ok, I’m off to do some product launch PR, hope you like the new releases!

Ok, it’s been exactly a month since the release of PCalc Lite and I figured I should share my findings with y’all. Sorry, I’m not entirely sure why I used the phrase “y’all” there, but let’s roll with it.

The executive summary is that sales of the full PCalc just about doubled over the same period, and we’re seeing sales run at around 1-2% of the downloads of the free version. 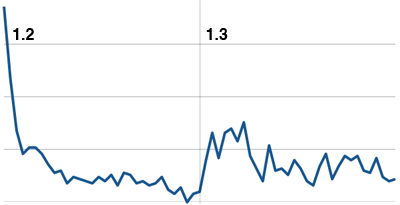 We didn’t get as much publicity on the 1.3, so the initial sales spike wasn’t as high unfortunately, but the month itself was a lot flatter, without the boom and bust we’ve seen on previous releases.

It’s still early days of course, but it looks like having a free version so people can try out the basics certainly helps. And I think I picked the functionality for PCalc Lite reasonably well. It’s pretty good for a free app, but not so useful that it’s hurting our sales, which was my main fear.

Anecdotally, I did have quite a few people tell me that they’d gone ahead and bought the full version on the strength of playing with the free one.

Last time I checked, PCalc Lite was the most popular calculator on the US App Store. Downloads of the free one are falling off, perhaps as it gets further away from the front of the listings, but we’ll see what happens with 1.4 which should be due very shortly.

So, some key points I think:

I consider this a success anyway.