Apparently, I haven’t written anything here for nearly two weeks which comes as a bit of a surprise to me… When I am coding, time seems to flow quite differently. Anyway, the one of the two main reasons for my silence is that I’ve been working away on a new 1.2 release of PCalc. 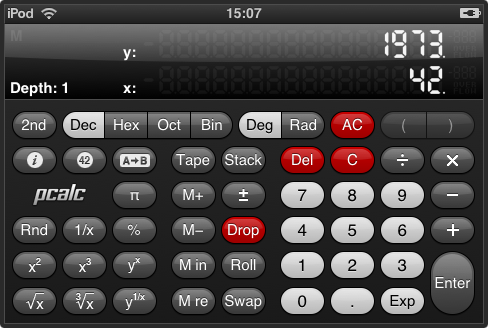 It’s got an optional two-line display mode for the RPN folks, and a couple of new themes. It’s a nice update I think. The two-line display has been a very common request since the iPhone version came out, but there was a large number of things I needed to do to make it possible. Most of that work happened in 1.1.

In order to support a variable height display, the button area below it needed to be resizable rather than having all the positions hard-coded as in 1.0.x. That led to writing the dynamic layout code which as a bonus meant that I could support multiple different layouts.

Also, in 1.0 the buttons were all drawn using pre-rendered PNG files. That worked fine, but it meant that every time I introduced a new button, I needed to create a new background PNG file of exactly the right size, as scaling the graphics made them quite blurry. A better way of doing it would be to draw the buttons on-the-fly in code, so they could be any size at all. Luckily, I had just the technology for doing that in the DragThing theme code, so I used that. And, as a bonus I could now support multiple calculator themes.

Point being that all this started with the requests to do a two-line display, and that simple request led to rewriting large chunks of PCalc to make it much more flexible, and now the original feature that started it all is finally done. This makes me happy.

PCalc 1.2 isn’t as big an update as 1.1, but I’ve spent less than a month on it rather than the two months I spent before. I think that’s a reasonable goal for doing iPhone application updates. In two months, you slip so far down the listings that people forget about you.

Hopefully, the release will also improve sales, and I plan to try every trick in the book to get it noticed this time round! It should be submitted to the App Store within the next few days, and I expect it will be on sale in about a week.

Now, while I wait for my beta testers to give me the ok, I will return to the second reason I’ve been a bit quiet – exploring the wastelands of Fallout 3 🙂

One thought on “Relativity”